How quickly a year flies by! Its hard to believe that it is now 12 months since the building was formally handed over.

The positive feedback has been tremendous and all involved in the project are immensely proud and pleased at the support shown by the local community and visitors alike. There has been an incredible increase of 164% in library usage from the previous year with 600 new members joining between March and Dec.

The new facilities have also given the opportunity for numerous activities & events to place making the building a hub for the whole community.  This Spring there are still lots of activities for the whole family to enjoy taking place. Click here for more details.

We are also very pleased that those visiting the building in an official capacity have been heaping their praise as well. Like the Oscars a couple of weeks ago it is now Award season in the Building Industry and the Masters House has been awarded/nominated by a number of bodies for some of the highest accolades in Construction. We will be attending the various ceremonies over the next couple of months so figures crossed! 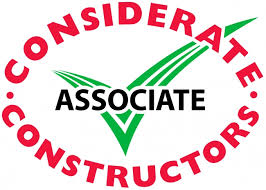 Considerate Constructors Awards (We have been nominated again for either a Bronze, Silver or Gold Award)  - 26th April 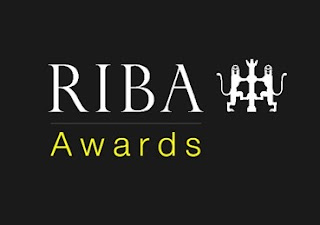 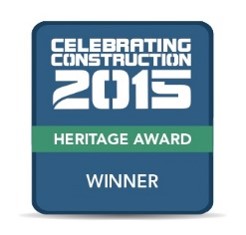 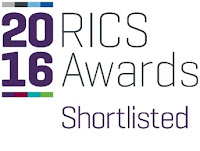 Construction News Awards - Finalist - Interviews to be held in London on 27th April
SpellerMetcalfe where privileged enough to be award on Contractor of the Year for the whole of the UK back in Feb.

Local Area Building Control Awards - The Masters House has been nominated in 3 categories! 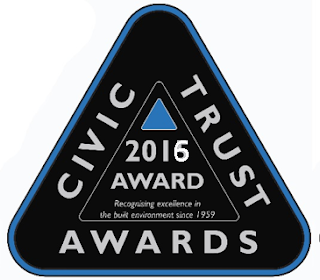 We will update this space to let you know how we get on - and thanks to everybody who has shown the project support.

After years of planning and over 3 years of construction work the Masters House was finally formally handed back over to Herefordshire County Council last week.

Over the last few weeks – carpenters, electricians, stone masons, plumbers, painters and groundworkers have all been working hard in order to get ready for the opening. The guys have really bought into the importance of the project and it has been really pleasing to see the various trades working together towards a common goal. The last few months have been challenging with limited space and lots of people on site but everybody has worked well together.

It is difficult to articulate how much effort, passion and commitment has gone into the project not only from those directly involved with the design and construction but from the numerous community groups who have freely given up their time to photograph, guide and be part of funding bids to ensure its successful completion.

Indeed the level of community buy-in to the project has been tremendous with the positive feedback received incredible. All the site team and subcontractors have played a part in the work in the community and the promotion of the positive side of the construction industry which unfortunately does not often get shown – indeed the site was privileged to earn a Silver Considerate Constructors Award last year. More importantly the project has generated it own legacy – from the experience earned from the tradesmen on site, the apprentices who have started off their careers through to the volunteers & children who have enjoyed making Wattle & Daub frames.

The library itself is due to opens its door for the first time on Monday 9th March where visitors can not only take out books but tour the building and follow the 'interpretation' route which guides them through the history of one of Ledbury's important buildings. In a brief video (accessed by clicking on the link) for BBC Hereford & Worcester our Site Manager Ed Mandrell explains the significance of the building fabric.

We hope that when the public get their first look at the building they will be as pleased with the project as we are.

Below are a number of photos of the finished building:

Work continues apace with the internal finishes now all under way - stone floors are being completed, plastering is almost finished, flooring and painting will commence in the next few weeks. Additionally the internal joinery is being fitted along with Mechanical and Electrical installations.

On Monday 3rd at a red carpet ceremony in London the Angel Awards will be presented by Andrew Lloyd Webber - hopefully Adam Hill whose has been working on the timber repairs for the project will be amongst those receiving an award!


Latest photos from site below:

As part of the wider Herefordshire Heritage Open Days and Museums event (click link for full programme) the Masters House will be holding Site Tours on Saturday 13th September at 10.00am, 11.30am & 1.00pm


This is the last chance to take one of three tours of the building before it opens to the public and is fitted out as a library. Enjoy a special display about the painted timbers conservation project.


Booking is essential (available Monday – Wednesday). Maximum 12 people per tour. As this is a building site sensible footwear is required. 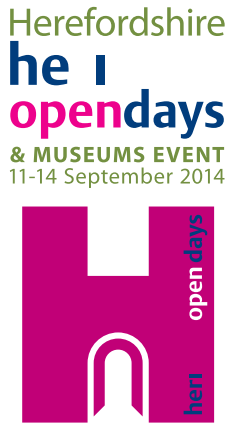 Internally - The underfloor heating and lime screeding is now complete. Lime plastering works have significantly progressed as well as repairs to the wattle and daub panelling – the mixture for which was produced with the assistance of  children from Ledbury Primary School.


Infills to the panels on the kitchen wing are complete.

Externally -  brickwork repairs are nearing completion and the windows have been installed. Rendering has started on the East Elevation.

The annual English Heritage Angel Awards, founded by Andrew Lloyd Webber and supported by the Telegraph, celebrate the efforts of local people who have saved historic buildings and places.

We are delighted to say that Adam Hill who is currently working on the Masters House has been nominated this prestigious award for his inspirational work and continual improvement over the course of the works.


As the ultimate winner is voted for the public it would be excellent if you could register your support for this outstanding young man by taking a couple of minutes to complete the following voting form by following the attached link! https://www.surveymonkey.com/s/VJSGRJ8

See below for details of the submission that was made to English Heritage detailing Adam's hard work and progress throughout the project.

'Extract from the submission'
Adam was employed as a labourer in 2011, carrying out general works on site. It was soon recognised that he had a keen eye for detail and, once it was revealed that he had some training as a joiner, BHA the architects suggested that he should be given the opportunity to work on some minor repairs on the historic timber frames.

In this context, Adam soon flourished and his true potential became abundantly clear. Indeed, his early framing repairs demonstrated innate skill and outstanding craftsmanship far beyond his years and experience.
As such, he was soon trusted with many of the more demanding historic repairs, including fine mouldings, frame repairs and chamber beam repairs. Adam completed these works with exceptional precision and acute attention to detail, deservedly earning a pivotal role with the specialist framing sub-contractors. He became responsible for the execution of the most complex repairs to medieval timbers throughout the Master's House.

Moreover, Adam has proved himself to be an inspiration to the workforce with his diligence, care and enthusiasm. He has been pro-active in learning and executing new found skills, spending his spare time making traditional tools for his colleagues. These have included a range of carpentry tools (framing slick, froe and gouges) and lignum vitae beaters for the leadworkers. In his research, Adam has gone to extraordinary lengths: making his own forge at home to cast a fantastic array of axes and blades out of old car springs.
Adam has demonstrated his proficiency as a sympathetic traditional craftsman and is set to have a bright future within the heritage sector. He made an outstanding contribution towards the repair of the one of the most significant surviving examples of a medieval timber framed hall house in the UK. We have no hesitation in highly recommending Adam for the award for 'best craftsmanship trainee'.

See the Heritage List entry for the Master's House, Ledbury
Posted by Matthew Bailey at 10:08 No comments:

Although not directly connected with the Masters House project - Western Power on behalf of Herefordshire County Council will be undertaking the construction of new substation to replace the existing one which is currently located behind the 'Barn'. The new substation will be in the location of the existing bike racks within St. Katherines Carpark.

To faciliate these works the carpark will be completely closed on Sunday 8th June to allow alternative linemarking works to be undertaken - all vehicles must be removed by 7:30am. The existing disabled bays and bicycle racks will be relocated within the same carpark.

There will be ongoing excavation and construction works within the carpark undertaken directly by Western Power throughout June. We understand they will endevour to keep disruption to a minimum although there will be occassions when the footpath from the carpark into town and at the back of the Feathers Hotel may also be disrupted. 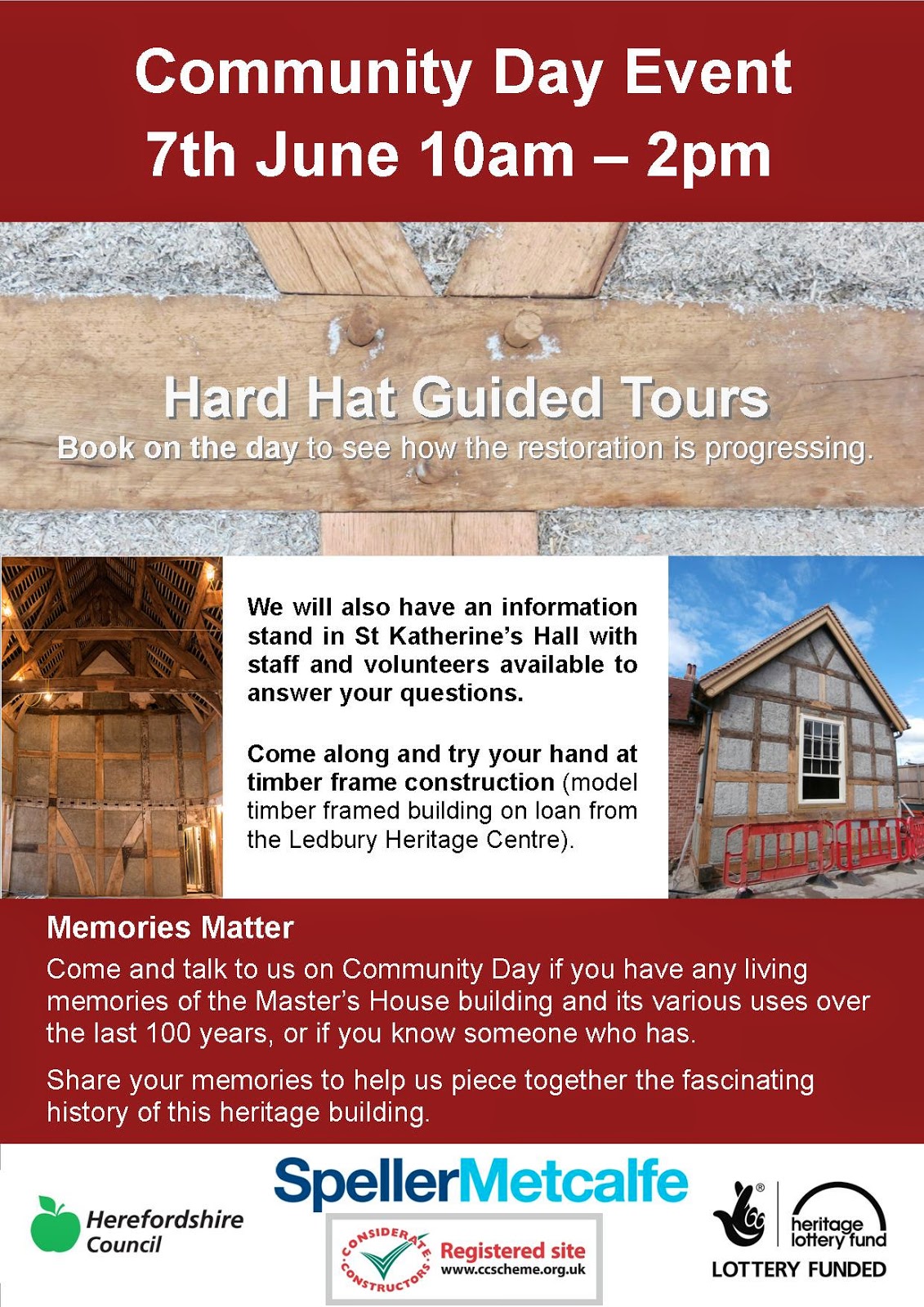 The Masters House will be open for tours this coming Saturday 7th June as part of Ledbury Community day. This year over 60 local groups have signed up to put on a variety of events throughout the town. Last year was a great success and this year should be even better. For more details, programme and locations of venues visit the website http://www.ledburycommunityday.org.uk/
Posted by Matthew Bailey at 11:13 3 comments: